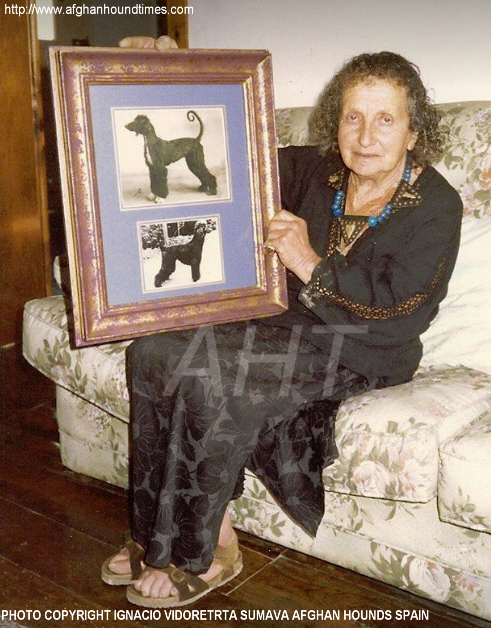 He was a top winner in the fifties and one of his greatest wins were the BOB at the 1950 AHC American Speciality under one of the most respected judges in these days, Mr. Alva Rosenberg. He was the first Afghan who won the hound group at Westminster KC in the same year.

The other import in the finals was a striking black Afghan hound. Champion Nissim's Laurel a dog which scarcely attracted attention upon its arrival here two years ago. The hound's handler and joint owner with Sol Malkin, enthusiastic Sunny Shay deserves credit for guiding Laurel so far at the Garden Show.

Mrs Shay persevered in her grooming and training of the Afghan to the extent it finally came into its own last Sunday winning the top honors at the breed's specialty show and the praise of Alva Rosenberg judge who told us he had seen few equals of the dog for type, condition and movement on the day. The Afghan at its peak of coat bloom and showing form, blocked one of Philadelphia's most serious contenders from reaching the show finals. This was the Whippet champion Stoney Meadows Masquerade, named "Tony" for short by owners Mr and Mrs W P Wear, Penllyn.

Like his mother, Ch. Turkumans Nissims Laurel, was a black with white feet. The markings could have gone up to the pastern of his front feet, when one lookes at old photos, but he also had a white mark in his face, a common thing at the Turkumans!

Mrs. Cynthia Madigan Boissevain got to know Sunny Shay in 1950, made friends with her, and to cut a long story short, bought a grandaughter from Nissims Laurel. This was the beginning of the BRANWEN kennels in Spain and the way the Shirkhan blood came to Europe and Nissims Laurel got "back to England via the KHANABAD kennels of Margaret Niblock.

Juliette de B.-L. left Britain shortly after the Nissims Laurel litter, lived in Israel, breeding Afghans, lived on a Greek island, breeding Afghans, reared them "naturally, travelled a lot around the world, and became "The Legend that is Turkuman. We understand that "Nissim" was the name of Juliette's brother who was killed in the Spanish Civil War and Juliette perpetuated his name by including it in the name of some of the Turkuman's.